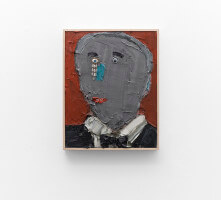 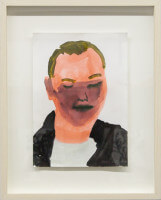 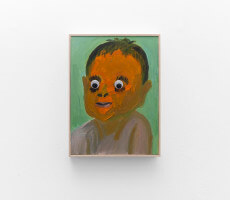 SMAC Gallery is pleased to present On Repeat, a solo show of new paintings by Georgina Gratrix. This exhibition will be her third solo with the gallery and her first in Johannesburg.

To play a song on repeat is to play it over and over again, to wear out the needle on the record, to wear the song thin. In Gratrix’s practice and, in particular, her pattern-like canvases, the opposite is true – the more she repeats gestures and symbols, the thicker they become. With each repeat application of her brush to the canvas, the surface blooms with luscious daubs of oil paint, resulting in the proliferation of colour, form, shape and texture. Canine companionship, memories of her upbringing in Durban on the sub-tropical east coast of South Africa, these ­are some of the numerous things that present themselves as characters at the forefront of Gratrix’s uncanny imagination. Throughout each painting – a monomania of dripping, viscous colour – these various personal effigies reoccur. Fonz and Frank (Gratrix’s faithful, furry studio assistants) feature throughout, making their encore in the artist’s thematic discourse. Other popular, repeat offenders are lampooned pineapples, anthropomorphised tropical birds, vivid flowers and blinging items of jewellery. This lexicon of symbols that infinitely echo in the artist’s paintings become near idols; rivaling many an #instafamous pet. Gratrix’s “gushy pop songs” – as she refers to her still life paintings – resonate with the same kind of repetition as the pop music we play on repeat. It only takes a few minutes of a Top 40 radio hit to realise you’re hearing the same lyrics over and over again. As Elizabeth Hellmuth Margulis’s work has revealed in On Repeat: How Music Plays the Mind, her book on the phenomenon of repetition in music, it’s not just the songs we love that are so often built on patterns that repeat – drumbeats, rhythms, lyrics – it’s also that we love to listen to the same music, the same recording, again and again. Far from diluting our pleasure, reliving them only seems to reinforce our connection to these musical experiences.
Join the Cavalli Wine Club!